We’re back! After a long absence (almost 7 months!!), Get Stuffed is back! Apologies for the hiatus but our wedding took precedence & with the strict diet I was on, it would’ve been posts rambling about how much I was missing pasta, cakes, bread, alcohol etc!

We’ve also joined the world of Facebook so please give the page a wee like over there: https://www.facebook.com/getstuffedfoodie

A fitting first post back is about my visit to the BBC Good Food Show at the SECC yesterday. Oh my, what a foodie heaven that place was! Both my sister & I are big fans of cooking shows & always wanted to go along to the show. This year, we finally were able to have the time (and pennies) to go along.

Before going to the show, we’d decided to go along to see James Martin in the Super Theatre but when we arrived that show was sold out 😦 Instead we opted to go & see Tom Kitchin of The Kitchin in Edinburgh. Quite fitting actually, going to see a local chef at a local show.

We had a good couple of hours to kill before the show, which I thought would be more than enough time to see all the stalls – it was only enough time to get around most of the show!! There honestly was something for everyone – from cheese to cookies to gin (a lot of gin merchants!) to kitchen gadgets. Everywhere you turned, there were queues for various stalls & lots of tasters & freebies being handed out. What more could you ask for?!

We made our way around the stalls in our agreed on path – there wasn’t much logic to it! I could go on about each stall we visited but there were too many to mention! A few that stood out for me were: 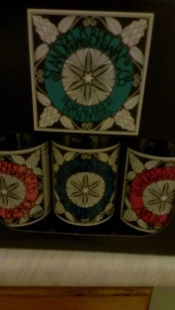 – Dough It Yourself – They have the St idea of selling cookie mixes in jars that just need an egg & butter added. Wish I’d thought of it first!

– Hebridean Sea Salt – Regular, Peat Smoked & Seaweed rock salt from the Isle of Lewis. They had run out of peat smoked by the time I got round to them but you need to try it to understand how amazing it is!

– Secret Sausages – They look like sausages but are in fact veggies stuffed in veggie casing. Genious!

A shout out does have to go the The Barnados Big Bake Off for the coolest cake of the day:

Finally 3pm came around, much quicker than I thought it would, so we went off to the Super Theatre to see Tom Kitchin in action. He made 2 dishes – pumpkin soup served in little pumpkins & (I can’t remember the name) mackerel & orange dish. Both looked pretty tasty & I have to admit I will be attempting a pumpkin soup in the next week.

Of course I couldn’t attend the show without picking up a few goodies:

– And of course how could I resist some Border’s Dark Ginger Biscuits!

One thought on “A Foodie Heaven!”