As the title suggests, I’ve found my baking bug again. Last year, I did several fairs which involved spending 1 full day & at least 3 nights a week baking. I think it was a bit of overkill for me as 50% of the time, the fairs were quiet & it was quite disheartening given the amount of effort I put in. Since Christmas I haven’t really done much baking so decided to sort that out the other week.

Since Easter is around the corner, I decided for Mother’s day to bake a couple of seasonal goodies. I’ve always fancied trying hot cross buns, even though I’m not a big fan myself. I did not realise how long they took to make! Honestly, they require more proving than your average loaf!! However, after a labour of love, I produced my first ever batch of hot cross buns that I was very pleased with. I think longer proving would have improved the size of them but they were scoffed down by family which is always a good sign.

My sister had given me the idea of making mini egg brownies as I already make creme egg brownies. Mini eggs are pretty much the only Cadbury’s product I love so it was a no brainer! Of course the baking gremlins had to ruin this idea! I used my go to brownie recipe from the Hummingbird Bakery (if you’re ever in London, pay them a visit!) but with my focus being too much on the hot cross buns, I didn’t put my oven to the right temperature. This meant a batch of what looked like cooked brownies but they were all gooey & underbaked inside. That said, my husband & sister still ate some as they were still nice & chocolately if not the right consistency. 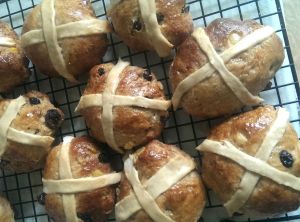 This sunday I also tried a couple of experimental bakes with double choc m&m cookies & protein brownie. I was so pleased with the cookies & will be posting the recipe shortly. I’m on a weight loss journey at the moment (I won’t bore you with details) so decided that the recipe for protein brownies from Mike Samuels of Healthy Living, Heavy Lifting sounded worth a shot. For me, since I’m used to making “real” brownies, the consistency of these was too weird. It was a sponge-like texture & tasted a bit strange. That said, once mixed with a bit of agave syrup, greek yoghurt & berries, it was perfectly edible. Further experimentation is required for this one…

It’s not all been about the bakes in the world of Get Stuffed! I actually have eaten at 2 restaurants I’ve not been to before – Butchershop & Ichiban. However, on both occasions I was not in blogger mode so did not take any pictures of my meals to share. Shock horror I know! Sometimes it’s not all about the food but about the company & having a good meal with friends, which both of these occasions were so it completely slipped my mind to take pictures.

For dinners recently, I have been really impressed with the quality of the dishes I’ve made using some BBC Good Food Recipes. I got a subscription to the magazine as a Christmas present & have been hooked ever since. The bonus is that a lot of the recipes are on the website too for ease instead of digging out old copies of magazines! Recently I’ve made Chicken Cacciatore, Dan Dan Turkey Noodles, Soused cabbage & Vietnamese Caramelised Trout. My favourite being the Chicken Cacciatore as it was so full of flavour, just like a dish from an Italian restaurant & so easy to make! (PS follow me on instagram @getstuffedbakes to see regular foodie photos) 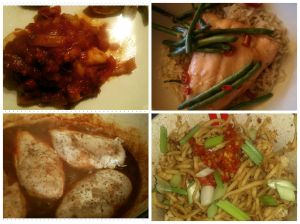 Carrying on from the last time, here’s some foodie news & openings:

Ingredients (can be easily doubled)

For the rice, cook it as per the directions on the packet. You could also use some pre cooked rice like Uncle Ben’s for this to save time. While the rice is cooking, in a small pan, put in the soy sauce, brown sugar & jerk seasoning & bring to the boil. Take off the heat & put aside for later.

Put the pepper & chilli into a frying pan & sautee for around 4 minutes. Next, add in the pineapple & cook until it starts to look slightly charred (brown around the edges).

Whilst the pineapple is cooking, heat a griddle or frying pan & add the chicken once hot. Using the sauce you created, baste the uncooked side of the chicken that you can see & turn after 2 minutes. Continue this basting & turning for another 2 times until the chicken is cooked through & you have a nice brown, charred look to the chicken.

To your vegetables, add the spring onions & sweetcorn & cook for a minute before adding the rice & mixing it altogether. 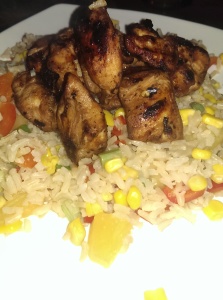 Place the chicken on top of the rice & enjoy! We accompanied this with some salsa to add another kick to the dish.

I will apologise in advance for:

First up is assembling the meatballs. To do this, you need to finely chop the top part of the coriander, leaving the bulk of the stems aside. I used my food processor for this but you can easily use a knife. In terms of how fine, it’s a personal thing as I don’t mind the leaves not being too fine which is how I left them. You will also need to finely chop 1/4 of an onion but I would recommend making this as fine as you can.

Throw together the coriander, onion. turkey mince, breadcrumbs & egg into a large bowl. Using your hands mush together so that it’s all combined. 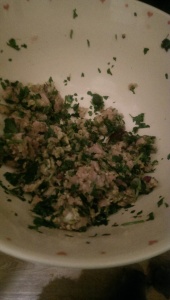 Once combined, it’s time to roll! Depending on how big you want your meatballs & how many mouths you are feeding, roll the meatballs into even sized balls. The recipe can generate about 16 meatballs, although as you can see on the picture, ours were on the large size!

Using either a little oil or oil spray, brown the meatballs in a frying pan. Set aside once browned.

Put the meatballs aside, finely chop the coriander stalks & finely slice the red onions. Cook these along with the garlic & peppers for 5 minutes.

The next part depends on whether you are using paste or chipoltes and your spice preference. If you’re not a big fan of heat, add a tablespoon of paste or the adobo sauce. If, like us, you like heat, add more. We used chipoltes in adobo & whizzed up 2 of them, along with some sauce to use. Add this along with the passata to the pot. 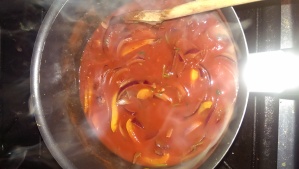 Throw in the meatballs (not literally or they will break) & make sure they are coated in the sauce. Leave to cook for 5 minutes. 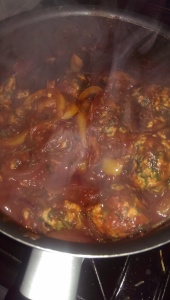 You can serve the meatballs with spaghetti, rice or since they are so full of flavour, you can eat them on their own!