Every month, I get a wonderful fish box from Coast & Glen that always has a good variety of fish. This helps when trying to do meals plans & experimenting with new recipes as you have to get your thinking cap on. This month’s box contained some squid which was a no brainer what to do with it – salt & pepper squid.

Handily, I had been given Jamie Oliver’s Comfort Food for my Christmas which featured a relatively simple recipe for salt & pepper squid. I have no idea what I did wrong but instead of lovely golden & aromatic squid, I was left with some chewy, anaemic squid. It was edible but let’s just say I won’t be in a rush to make this again! 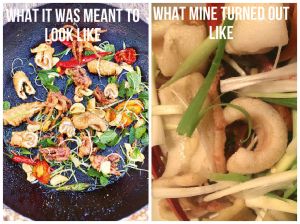 I had better success later in the week with Red Thai Pork that I made for the first time. It was a bit of a mish mash of a recipe as I had some red thai paste left. It all came together to make a lovely dinner, which I will post the recipe for later this week.

This week coming is my sister’s birthday & she absolutely loves macarons. I had heard nothing but good things about Mademoiselle Macaron & her wonderful macarons. There was a slight problem with my plan of getting some for my sister in that I live in Glasgow & the shop is based in Edinburgh. A bit of a jaunt to go through just for some cakes. Then Billington’s in Lenzie came to my rescue as luck would have it, they started stocking the macarons last week!

Billington’s has been awarded best deli in Scotland by the BBC Good Food Show 2 years running & I met the lovely Mark & Sue at the show last year. When we entered the shop, I could see exactly why they had been awarded the prestige – it’s like an aladdin’s cave for foodies! They stock lots of small suppliers I have come across at shows but never seen their stock anywhere to buy. Aside from the macarons, I managed to contain myself & pick up some other goodies including Poporopo popcorn, some craft beers & possibly the best brownie I’ve ever tasted in my life from Woods. Honestly, this was a fudgey, salty, caramely piece of heaven (and I only had a couple of bites!!). I did state that I had to walk out with blinkers on so I didn’t buy more stuff! Definitely worth a trip out to Lenzie to see what they have in store. 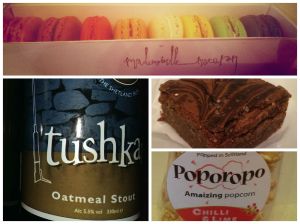 After my sunday dinner of goulash & tempranillo, the waffle maker broke its cherry & produced some half decent waffles! It was the first time I’ve ever made them so I knew they wouldn’t be up to belgian waffle standard but it is the goal! 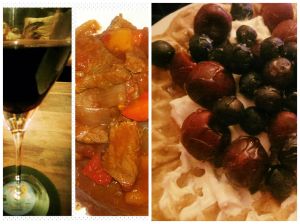 PS if you haven’t seen my foodie bucketlist post, then why not?! Check it out here.