When news came about that Grill On The Corner’s sister restaurant Gusto was opening in Glasgow, I have to admit, it didn’t excite me in the slightest. This was primarily due to another chain coming to Glasgow, which we’ve seen enough of in the past year! I was asked to go for dinner to review the restaurant a few days after it opened & figured I’d go & see if they could open my eyes.

Whilst Grill On The Corner is all about the steak, Gusto focusses on Italian dishes, with a wide range of pizza & pasta dishes on offer. First glance at the menu & I was pleasantly surprised at the wide range of healthier options in the form of salads & fish dishes. This was music to my ears as I’m currently watching what I eat, even though I’d kill for a big pizza most days!!

I really enjoyed the decor of the restaurant, with its large globe lights & crackled effect walls. It gave the restaurant a 1920s feel to it, without trying hard. This was further enhanced with the water jug & candle holders on the table. The staff were all dressed immaculately in black waistcoats & ties. This gave the restaurant a high end feel to it but the atmosphere is anything but pretentious like you may expect. Instead, the waiting staff are all happy to chat away to you & ensure you’re having a good time. 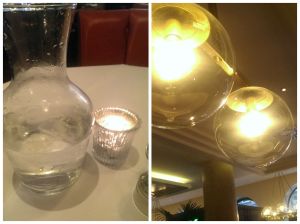 For starter, I could not resist ordering the salmon tartare whilst A opted for the deep fried salt cod ravioli (which I had my eye on as well). The salmon tartare was neatly stacked, with a quails egg & creme fraiche accompanying it. The creme fraiche went really well with it, adding a bit of moisture to it. In all honesty, I didn’t know why the quails egg was on the dish. It didn’t add anything to it & it feels like it was just there to pad out the dish, which was required as the salmon was so fresh. With every mouthful, I wanted more. I could have easily eaten another portion of it, it was that good! I tried a bit of the salt cod ravioli & it was crispy on the outside with flaky cod on the inside. A commented that there wasn’t much of a salty taste to it which was expected given the dish’s description. 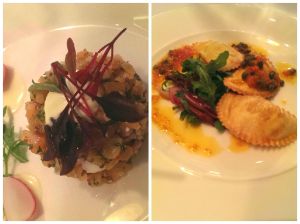 After looking at the menu, I had my heart set of the seared tuna steak for dinner. It’s a dish I really enjoy & just can’t get it right at home so wasn’t going to turn down an opportunity to have it made properly. However, as it was ordered, the waitress informed me that it had disappeared from her tablet screen, indicating that the last one had been ordered. Although I was really impressed at the technology they were using, I couldn’t help but be disappointed that the tuna wasn’t available. On the waitress’ recommendation I opted for the salt baked seabass instead.

When the mains came, the seabass was a spectacle. It arrived in a large platter, absolutely covered in salt & was prepped by the waiter before being placed on my dish. I chose to have a side of green beans & shallots with my fish. The fish itself was cooked perfectly, with slightly crispy skin & tender, flaky flesh. As the waiter scrapes off most of the salt, there wasn’t much left on the fish at all. The side dish was also a hit, with buttery crunchy green beans & soft grilled shallots. Very moreish! The pasta dish that A ordered I wasn’t too keen on after a taste. It was tagiatelle with prawn & garlic in a sweet chilli tomato sauce. For me, the sauce was too sweet giving it an almost chinese takeaway type taste to it. A, however, enjoyed it, commenting that the only issue for him was that the pasta was a bit soft.

Gusto’s dessert menu is one of the few that I could actually pick quite a few dishes off it. I think I must be getting a sweet tooth in my old age! The highlight being the nutella & marscapone calzone – who could resist that?! Unfortunately, I had to due to watching what I’m eating. Instead, I chose the strawberry & passion fruit mess whilst A went for the sticky toffee pudding. Alas, it was not to be as I was informed by the waitress that the fruit mess was not available. It was the third strike for us as one of the house beers wasn’t available when A tried to order it. It was quite disappointing given the restaurant had only been open a few days & it’s a chain so they should know what to expect. Either way it was probably a blessing in disguise for me as I was actually quite stuffed from what I had eaten! Naturally I stole a bite of the sticky toffee pudding. The sponge was melt in the mouth soft, with a sweet toffee sauce. I was surprised A didn’t lick the plate in the end!

Although it was clear that there were some teething problems with Gusto, it did not detract the fact that the dishes we’d eaten had been of a high standard & really delicious. Having seen other diners eating the pizzas, I know we’ll definitely be back so I can have one! Given the recent influx of burger & steak oriented restaurants in Glasgow, it’s nice to have a breath of fresh air being introduced into the Glasgow restaurant scene.

Disclaimer: We were given this meal for free & all views are of my own with no influence from the restaurant or their PR company. The PR company has also asked me to share the restaurant’s twitter account, which you can access at @gustoglasgow

Last year I attended the BBC Good Food Show & had such a fab time with the variety of producers & seeing a demo by Tom Kitchen. You can read all about it here. This year I’m thrilled to be part of the official blogger team for the show!

This year’s BBC Good Food show takes place in the SECC from 17-19 October & promises to be bigger & better than last year! There promises to be a wide range of producers showcasing favourites from cakes to gin to kitchen supplies & fresh meat & fish. And not to mention the tasters that most provide!

To celebrate being part of the official blogger team, I have 3 pairs of tickets to giveaway for entry on either Friday or Sunday at the show. Please note, these do not include tickets to the super theatre for demos but you can buy these at the door (I did it last year). To enter, simply share this post on either Facebook or Twitter & tag Get Stuffed! Entries will close on Thurs 2nd October. Good luck!

As it’s Great British Bake Off night, what better time to publish my interview with Glenn who took part in last year’s Bake Off. Glenn kindly agreed to meet me at the foodies festival to answer a few questions:

Tell me about these cricket cupcakes:
How did you hear about them? (I tell him I’ve seen them mentioned a few times on twitter from his show).
Well they have actually came up three times which is kind of unusual because the contestants don’t know what they’re going to get. I try to bake ahead of time because it’s an hour’s show & I think people would prefer to see a cake at the end of the show. So I bake a cake & we make the topping & icing & there’s a fortune cookie where people pick the topping but don’t know what they’re getting. They can get an absolute classic or something you wouldn’t expect like lime buttercream with salted caramel (it actually kind of works, it was really nice). One of the toppings that had a russian roulette element or Bake Off vs I’m a Celebrity Get Me Out Of Here was the caramelised crickets.

I did a job for Rentokil & made some cupcakes with crickets for them & it added an element of danger. People can pick them off & there’s plenty of icing so you don’t need it. If you do taste it, it tastes a bit nutty.

How has life been since the Bake Off?
It’s been brilliant! It’s been mental. When it first came out going anywhere was mental. Most of the bakers from last year went to the Cake & Bake Show in London, which was on whilst the show was still being aired. I think that will probably be the closest I’ll ever experience to seeing what it’s like being in One Direction or something! We were treated like royalty, it was absolutely insane. If we stopped for one second, crowds would form asking for pictures & our signatures & you couldn’t move as the crowd kept replacing itself. That was the absolute height of the complete bonkersness.

But since then it’s calmed down. Now people kind of recognise me but they don’t know what it is, just a positive facial recognition. A bit like “Do you work with my sister?” or “Where you on that train?”… I get a lot of that!

The Bake Off gave me the courage to do what I wanted to do 18 years ago. If I’d had the courage, I wouldn’t have gone into an industry, I would’ve either went to Drama School or done an apprenticeship in a kitchen. So in a funny kind of way, 18 years plus & the Great British Bake Off I’m doing what I’ve always wanted to do.

What Gave you the inspiration for the tour?
Well I was doing demos, which I think it was a matter of course that bakers are invited to do that. A guy was listening to me being interviewed by my local radio station, Radio Devon, and he had the idea to put me on stage. A lot of people don’t quite know what to expect: is it a cooking show? a demo? what is it?
It’s a bit of a bonkers idea but we did it in January & it went really well! I enjoy doing it!

What’s your most favourite cake & the one you would never touch?
That’s actually interesting, especially the second part, what one cake would I never touch? Let me come back to you on that!
Favourite cake, I don’t know! Are you a music fan? Because a lot of music fans, film fans & foodie fans are a bit fickle with questions like that because it’s often the last one you’ve had. At the minute though, I have to admit, I’m loving all things salted caramel. I know it’s been around for ages but I just love the stuff!
And what I’m not very keen on cakes that are textured like jelly, like those Japanese cakes. It’s the slimey part of them that is the problem. I love the flavours, like matcha tea & other oriental cakes like Korean smothered buns but just jelly cakes? Not for me!

Glenn’s show is on at The Roxy in Edinburgh at 4pm until the 25th August so be quick if you want to head along!